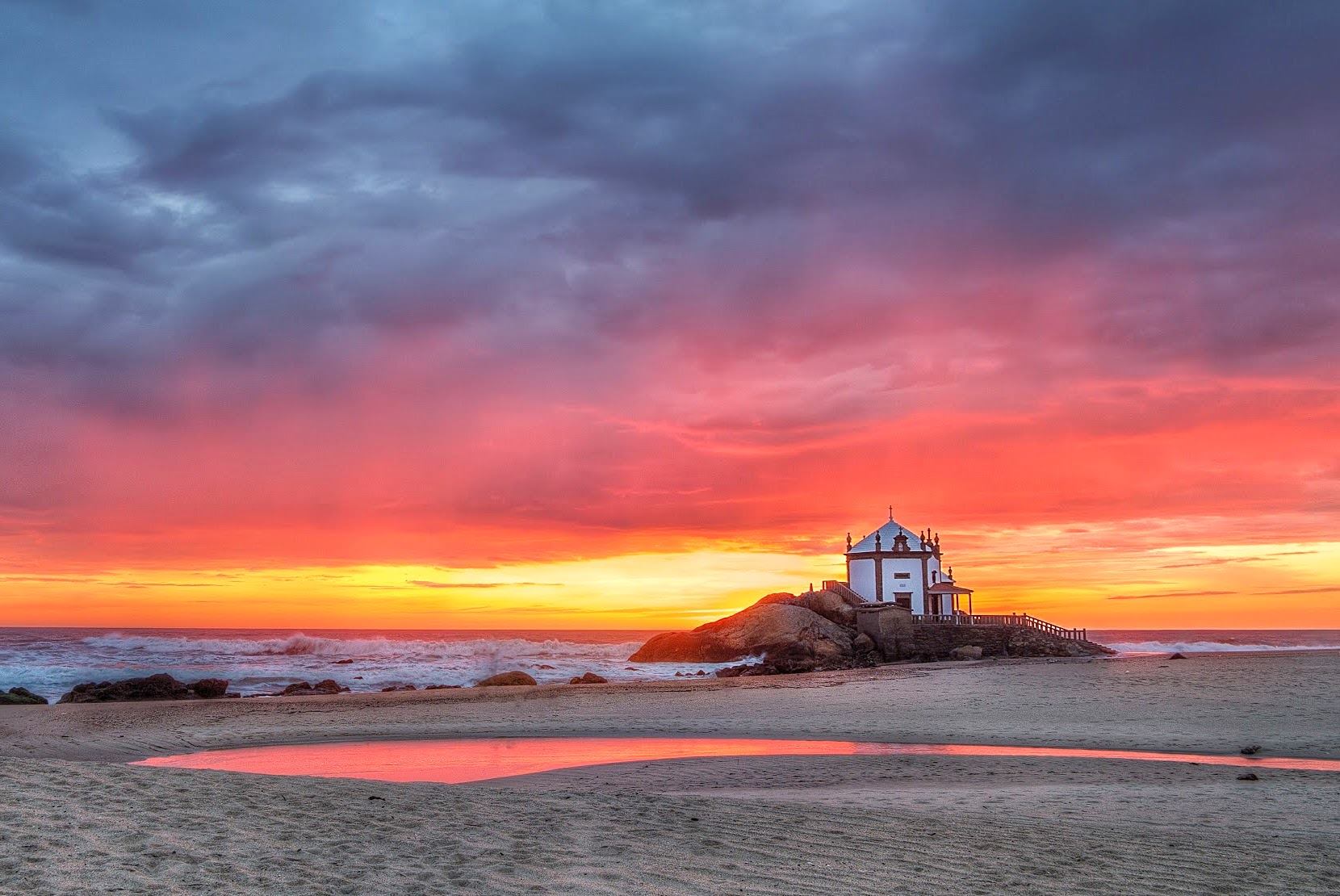 The small temple votive Mr. Stone is built on a rocky outcrop about 280 million years in Miramar Beach. The populations of the Douro Litoral locations here abound in May or June, on Sunday of the Holy Trinity and transform the beach into a huge party yard. This worship of the Lord of Stone, in this case Jesus Christ, It is the greatest manifestation of religiosity and spirituality of this region. In winter it is a lonely place and, with the tides, becomes a Leixão beaten by the foam of the waves.
There are many mysteries surrounding this building. Here are some.
Who built the Chapel of Senhor da Pedra?
The date of construction of the Senhor da Pedra chapel is not consensual. In the façade is a tile panel that indicates how the building year 1686, there not yet any document justifying the adoption of this date.
second Costa (1983), in the parish file Gulpilhares, there is a document dating 1794, where you can read the following: Says Francisco Caetano de Sousa Sacramento Abbot Golpilhares Gaya, there 40 years was erected by Abbot Jose Barbosa Pereira his predecessor, the chapel of the miraculous Lord of stone by the sea that parish with the proceeds of the alms of the faithful ". According to the cited document, the date of construction of the second half chapel and not 1686, which does not cease to be in perfect harmony with the architectural style and with the rococo carving of the chapel inside the altarpieces.(1)

Inside of the Lord of the Stone Chapel, there are three altarpieces in rococo style carvings, which made school in Portugal between the years 1750 and 1800, although altarpieces may have been subsequently put to early altarpieces, can, including, dating from the late nineteenth century, once, in the late nineteenth century and early twentieth century, Portuguese Decorative Art breathed one revivalist environment; who have never seen in our cities or cemeteries neo-Manueline, neo-Romanesque, neo-Gothic and neo-Renaissance?

Today is a place located in an excellent quality summer beach, very close to the mouth of a river, with a magnificent landscaping and visited by numerous people, mere tourists, many more happy boyfriend, here I told in just over an hour, at dusk and already cold 7 happy couples kissing, as a part of a ritual already established in the collective unconscious, because these sites make people happier and accompanied happiness is a friend of white passions.
Popular religiosity, sometimes quite ambiguous calls for help the mysterious forces want the good or evil, the problem healing, often health or to other measures, as human fertility and Agriculture, in return for offerings to the gods. Here is another example in this Chapel of Senhor da Pedra, because according to Mr. José Bernardo, cafe owner in front, It says here heal blackheads skin. But attention dear readers, usually the healing of carnations are associated with the cult of Saint Benedict, as in the case of St. Benedict's Open Door and why the healing of carnations is so important to take the busy São Bento? And where is St. Benedict in the Chapel of Senhor da Pedra? I do not understand!

Here the cult of Mr. Stone,as in all places of this kind, besides the liturgical feasts, It characterized by festivals and promises, religious way to 'pay' or fulfill the promises was fulfilled, two basic human needs: joy and healing health problems.

The Chapel of Senhor da Pedra has a fellowship that takes care of it.

First Bath Year
What started as a joke friends, there 46 years, that, “after the year-end dinner”, they decided “take a dip in the sea” when the party starts to wane and boredom to intertwine the prayers of these men, It is now a tradition. So says José Bernardo, cafe owner in front, which was one of 22 people to participate in the first dive. Since then, always celebrated until very recently.
Mr. Joseph, “now, this is a pilgrimage”. And this pilgrimage the sartorial bastardization is full with men – thong and stockings garters.
After talking to Mr. José Bernardo, I was willing to go to spend the end of the year the Lord of the Stone, but as I have legs, although beautiful, I will not hairy lady bather dress.
There is also a year of the bath in Carcavelos beach in the Lisbon region.
Additional References:
1-Travel with Me
2-SNPCultura