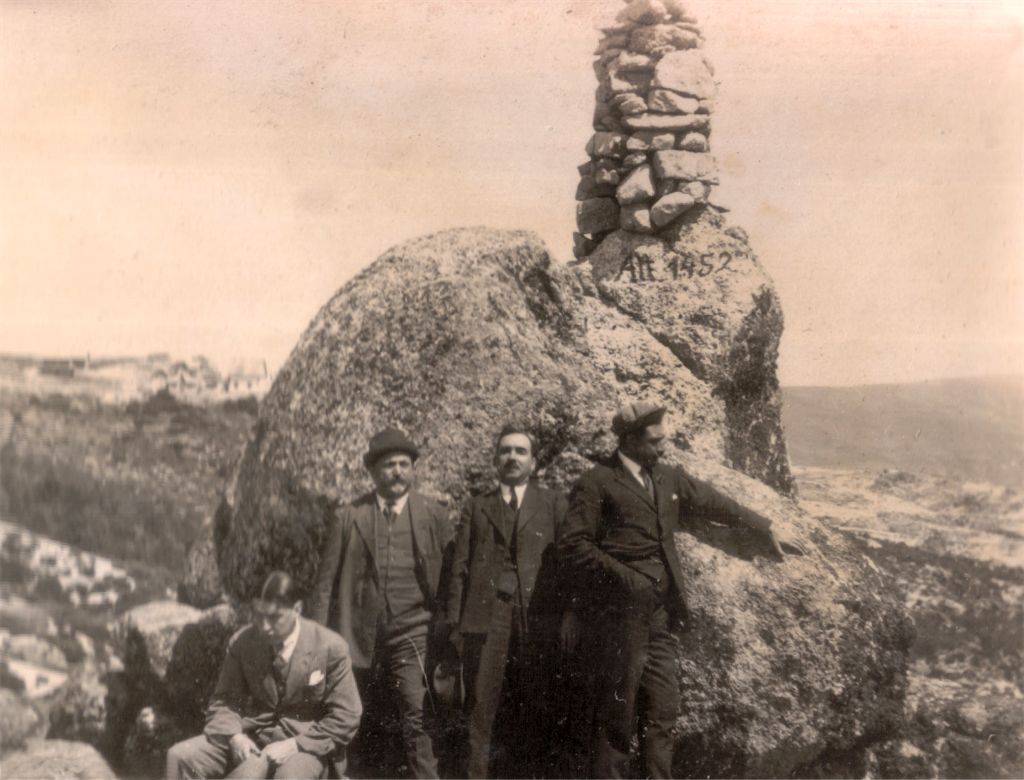 The Fragão Raven, seen from afar, It looks like a Chinese painting. Rounded boulders mixed with white flower heather and broom in clumps also rounded by wind. On top, the human hand has left a ball-point in March. Well marked on arrival to Penhas Douradas, the Fragão is a sacred place for those who know those raging altitudes, and for those arriving is an unforgettable surprise.

(In relation to the geomorphology granite Fragão Raven is a Tor- which is a Welsh name that was first used in 1955 by Linton investigations in the South West of England. We can say that a Tor is an accumulation of blocks in situ that is not transported, arranged geometrically, respecting diaclases system of granite that give rise to it-my note)

Once arrived to Penhas Douradas and dropped the car, the way there is short and we are seeing the Fragão the far Crow, a track which first descends and then ascends between rocks, to a balcony with an iron rod. The views of Manteigas and the Zêzere Valley let us cast, dissolved in the vast landscape of ridges that follow. At frente, the first valleys, covered in mixed forest and terraces that won those flat land as steep slopes. The slope plunges again on a huge fir forest, de pseudotsugas, cedar and pinus sylvestris, remembering an alpine landscape.

If we turn to the west, a house with white and red stripes, the pointed roofs topped wooden lace, observes us away from the top of the boulders. In Fragão Crow was born the refuge of Alfonso Costa, (at its Vila Alzira, as a tribute to his wife. Fhi one of the most important Portuguese politicians of the first quarter of the twentieth century, figure as controversial as intense, born in Seia more than 110 years; My notes).

But there is to look for, amid the crush of Fragão Raven boulders, a narrow passage to the other side of the rocks, through which we come to a balcony rough, made of huge stones stapled serving as a bench on the ridges passing green foreground the dark and go away into lighter gray to the Spanish mountains. It is here that one should see the sunrise in the Sierra, when the sky clears and takes reddish colors, gray, as every day, and always different. The beauty of the landscape is indescribable and the mists mark the white valleys among the gray of the mountains.

If your eyes get around, just below the rocks where we sit, in the valley (near 800 meters below) one sees the roofs and the streets of Butters and the wind comes from below, skimming the forest that covers almost vertical slope. The Zêzere Valley is a glacial valley, who cut steep slopes. Butters grew facing the valley, for sul, and gave shelter to the shepherds, the mountain men, a town that lives to the rhythm of the mountain, and where it was installed the headquarters of the Natural Park of Serra da Estrela. Here, as the sources of the Zêzere, Thank if they made the park and kept in nature conservation landscape, not dispersing homes and factories, concentrating the buildings in the village, and leaving only the homes of pastors in stone and thatch, the walls of rye terraces occupying, worth above, this beauty as authentic.

In Fragão Corvo across this landscape is green and red in autumn, because the mixed forest is composed of deciduous trees that are embodied and conifers that remain evergreen. Winter is very strict in Penhas Douradas, but is all white, as if the snow painted a round band over the rounded boulders and leave spots on the branches and needles of spruce.

There are benches to see the view but the rough stones online serve and guard the viewpoint and surface to sit. No place to facilities and as in Sagres it takes time and we fill in silence for this authentic mountain landscape ".

Although not display the Fragão Raven's worth seeing this little tribute movie to Butters film about urban landscapes of the past century ( some lost ) carried out under the Ancient Fair in June 2011, based on a first selection of photographs of the photographic archive of Miguel Esteves Gaspar de Carvalho

Panorama of the Church of Olhão (*)